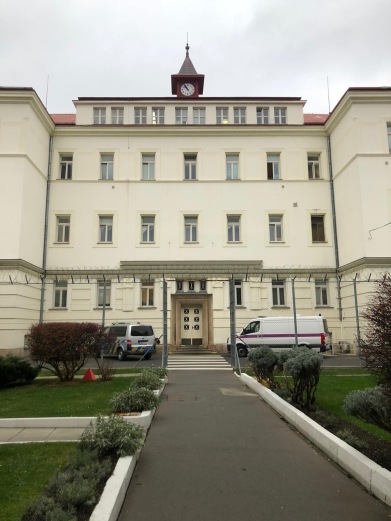 On a cold, grey Prague afternoon we were heading out to Pancrac Prison. We took the metro from the town centre and made our way to the prison administration block. We checked in, swapping our passports for identity passes and waited in reception. Through my husband’s contacts we were about to visit the largest prison in Prague, where Alice was kept before her trial. The prison is next to the main court and an underground tunnel links the two buildings so prisoners can be brought easily from one to the other. This court was the venue for the show trials and was where Alice was convicted of espionage in 1954, along with Dora, her friend from the Spanish Civil War.

We left the carpeted calm of the administration block and stepped out into the cold to be admitted to the prison itself. Huge iron grilled doors clanged behind us as we walked into the reception area, and another set awaited us a few yards further on to admit us into the body of the prison. As we waited between the two sets of grilles for the second set of locks to be opened, a newly arrived female prisoner was being processed and frisked by a female prison guard before being escorted away to the medical block for a health check. Now, as in the past, the prison contains both men and women.

Pancrac has been the scene of many horrors and has a memorial exhibition to those who have suffered there. This was our first destination. The exhibition was in the process of being refurbished and so many of the wall displays were covered in plastic sheeting and the rooms smelled of fresh paint. We stopped at a wall with the names of those who were executed under the communist regime and I searched immediately for the names I would recognise. They weren’t there. On further enquiry it transpired that none of the names or statistics of the dead and imprisoned included members of the communist party who had been part of the regime before their arrest. It was explained to me that only those who were truly opponents of the regime were included.

This was quite a shock, as nearly everyone I have read about and researched was a member of the communist party. Of course, many others were persecuted, including many priests and political activists of opposition parties, but they had not been the subject of my research. One of the key victims who is acknowledged and well known by all Czechs is Milada Horakova, the only woman to have been executed by the regime, a member of parliament for the National Socialist Party. A film has been made of her life and one of the major roads in Prague is named after her. A memorial to her is situated a little way outside the prison. She is seen as a proper martyr, as indeed she was. The communist prisoners are viewed as less deserving, so little deserving, in fact, that their deaths and arrests are not even included in the statistics.

It is complex. Slansky , the key defendant in the show trial, was the General Secretary, second in command to the president, and entirely aware of the arrests and interrogations that went on before he himself was caught in the same web. Another of the defendants was Karel Svab, who was responsible for Alice’s arrests and interrogations and was arrested much later in the process. I can see that there is a difficulty in determining at what point the perpetrator becomes one of the victims. However, like Alice, many had joined the Communist Party for entirely altruistic motives, believing in the ideals of a fairer, more equal society, international co-operation and peace. Many, like her, put their ideals into practice, risking their own safety by volunteering in Spain, fighting in the Soviet army, working with the French resistance and many were arrested and imprisoned in Nazi concentration camps. Dora, Alice’s co-defendant, survived two years in Auschwitz.

For people like Alice and Dora, the physical and mental torture affected their health for the remainder of their lives, but almost worse than that, they were falsely accused by their former comrades, by people who knew the truth about their commitment to the cause and who used them in response to pressure from the Soviets. It reminds me of the displays in the Museum of Communism, which I visited when I was here in May. The museum paints communism in universally negative hues and there seems to be no recognition of the early idealism and heroism of many who joined in the 1930s. 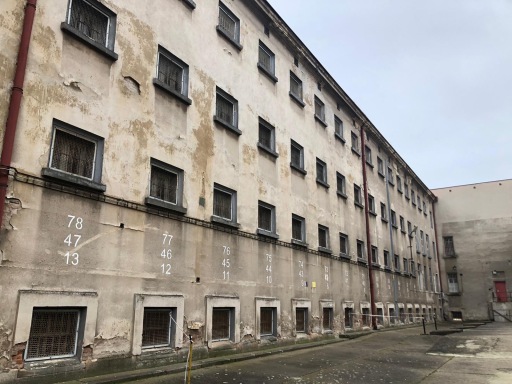 Pancrac has changed since those desperate days, but it is still a prison. Every few yards either huge metal doors or clanging grilles accompanied our progress through the building. After the exhibition, we headed for the wing where the political prisoners had been held. It is now in use for prisoners on remand, and as we approached, the sound of people moving around and talking echoed from the hard floors and metallic doors. As soon as we arrived, however, the prisoners were all escorted back into their cells and locked in so that we could walk in the corridor and see one of the cells. It was a strange experience, knowing that behind nearly every door a prisoner waited for our departure to resume his conversation. Even stranger to think back to the silence of these cells in the 1930s when the political prisoners were all kept apart, awaiting their appearance in court. For Pancrac was not the place they served most of their sentence, it was where they went before trial or perhaps after initial arrest. It was also the place of execution.

There were three execution sites: one used by the Nazis in the second world war, one used between 1954 and 1989, mostly for criminal offences (the last political execution having taken place in 1960). The third site, and our final destination on the tour, was where most of the political executions took place between 1948 and 1954. This one was outside, behind all the main prison buildings, situated in two recesses around the back of the hospital wing. It was the most inconspicuous place they could find and executions took place at five o’clock in the morning. The windows in the hospital ward were covered and the patients in the nearby ward were supervised at gunpoint and told to remain immobile and silent so they could give no sign to those about to die. Now a memorial marks the spot. 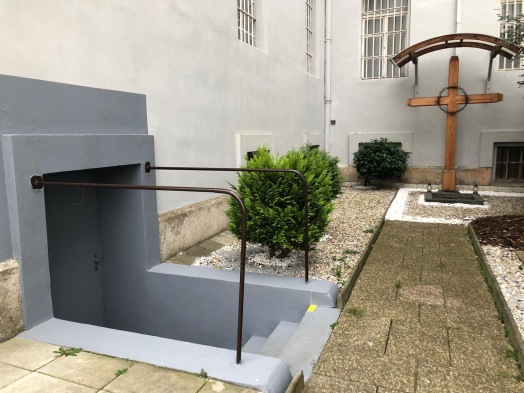 It was a grim afternoon, but the most chilling moment was the visit to the rooms used by the Nazis during the war. Three rooms of bleak horror. The first was the ‘court’ – a long table with 4 chairs placed behind it. Prisoners would be brought in, have the charges read and the sentence of death passed, with no attempt at defence. They would then be ushered immediately into the adjoining room to be executed. Most were executed by guillotine, which had been brought from Germany for the purpose. The guillotine is still there; the original that was fished out of the river by Czechs after the hurried departure by the Germans and preserved. In most other cities, the Nazis managed to destroy the evidence and blow up the execution sites before they left. Also in the room was a small wooden step ladder leading to a row of nooses; these were for Jews and Germans who refused to join the army and fight. The reason for the difference was that the Nazis did not want to be polluted by the blood of Jews and cowards. The final room was where the bodies were laid to bleed out before being transferred into rough wooden coffins for transportation to the crematoria. The bodies were burned and the coffins returned for re-use; some still remain in the room, stacked against a wall. 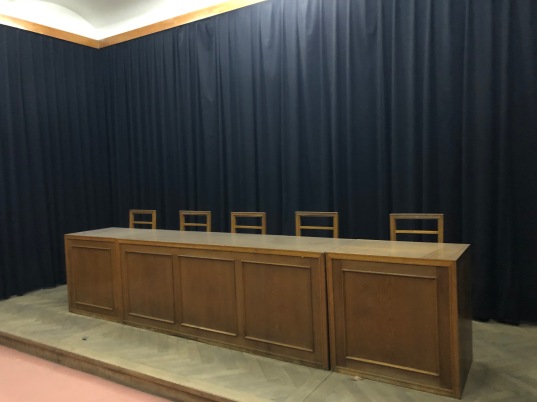 The cold that seeped into our bones from these rooms had little to do with the outside temperature. As we sat on the warm tram on the way home, it took a long time for the cheery scenes on the winter streets to dispel some of the sense of calculated evil that had infected our very being.

6 thoughts on “A Cold Afternoon”