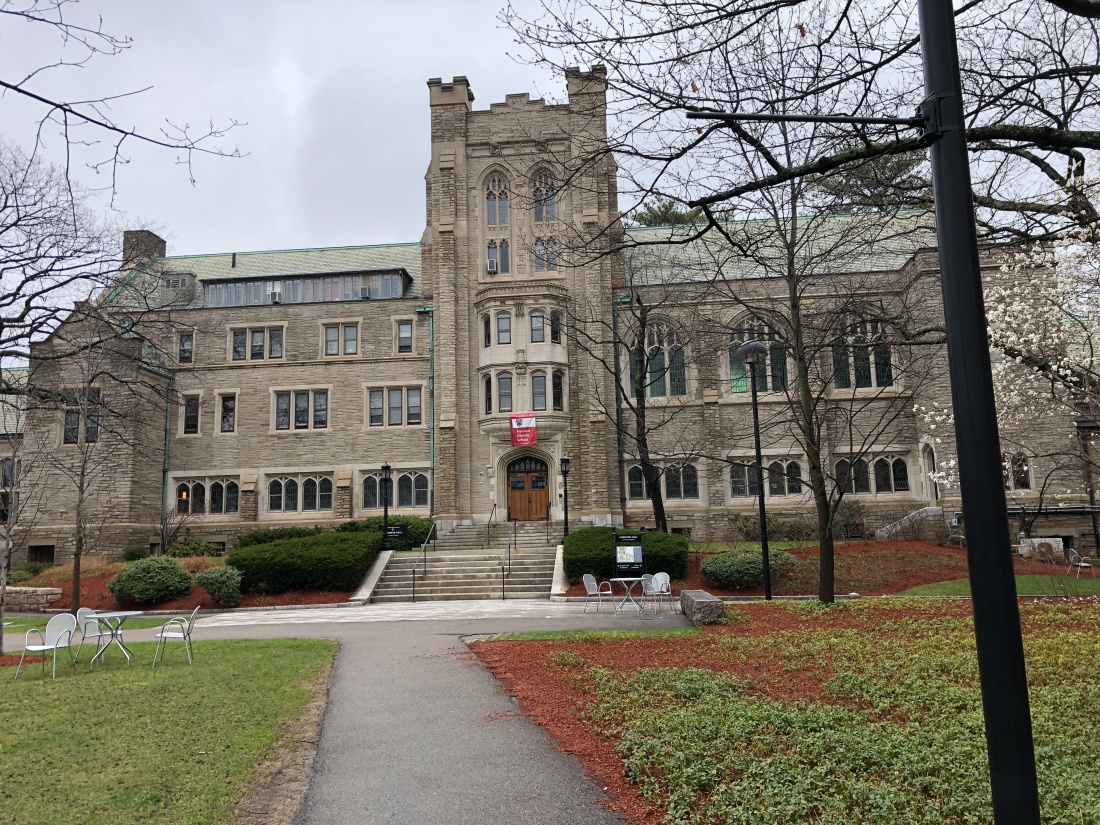 The Andover Theological Library in Harvard is an imposing building. As I walked in through its large oak door, I imagined myself seated in a vaulted room surrounded by books or records. In fact, I had to walk through the older building to a modern wing, take a lift upstairs to a quiet corridor with ordinary offices opening on to it and finally arrive to be greeted by a helpful young woman who showed me to a small conference room with a large window. There, alone, I was given the many box files I had requested.

I was there to research my father’s work after the war, organising medical teaching missions to Europe, more specifically to Czechslovakia and Austria. The missions had been organised by the Unitarian Service Committee, hence their being placed in the Theological Library archive. The box files were full of reports, letters, press cuttings and photographs charting every aspect of the missions: page after page of closely typed sheets detailing every decision, impression, request, problem and the many successes. I was searching to find out more about those crucial months for Erwin and Alice, between the end of the war and the end of their marriage.

In the last years of the war, Alice was working in Pittsburgh for the International Workers’ Order and alongside her paid job, working on a voluntary basis to help refugees fleeing Nazi occupied Europe. Erwin was a medical officer with the US army, crossing the Elbe and involved in the final push with Gen.Patton to defeat the Germans. He was with the troops who liberated Buchenwald and was greeted there by schoolfriends he could no longer recognise; they had to explain to him who they were. There too, he found his uncle, so ill and so emaciated, that despite Erwin helping him to Bratislava to convalesce, he only survived for a few more months. I don’t know at what point he discovered that his own parents had not survived at all; they had been killed in Auschwitz in 1942.

As the Allied troops liberated Europe, Erwin took over the administration of the hospitals and derived a grim satisfaction from his seeing his own Jewish surname emblazoned over them as the officer in charge. I can’t imagine how it felt to see what he saw and understand what had taken place in the Europe he loved.

A year later he returned to Europe at the head of the medical teaching mission and met the politicians and doctors who had survived the war, and worked with them to bring expertise and help. The very idea of this, suggests a level of forgiveness and humanity that I find overwhelming. I sat and read what it involved, how he hard he had worked, often seven days a week, until the early hours of the morning and all because he retained a hope that the world would learn from the unspeakable acts of the past. My respect for the man who was to be my father took on a whole new dimension.

Of course, if anyone was to organise a medical teaching mission to Czechoslovakia, he was the ideal choice. He was an American citizen from birth, his birthday was the 4th of July -impossible to be more patriotic than that – and he had been an officer with the US army. However, he had lived in Czechoslovakia from the age of nine onwards, had attended secondary school there, graduated as a doctor from Charles University in Prague and completed his studies with a year’s post-graduate medical training in Vienna. He spoke Czech, Slovak, Hungarian and German completely fluently (as well as French and English). He could be trusted both by the Americans and by the Czechs. He understood the sensitivities of both sides and was the man to overcome the reservations each might have about the other. 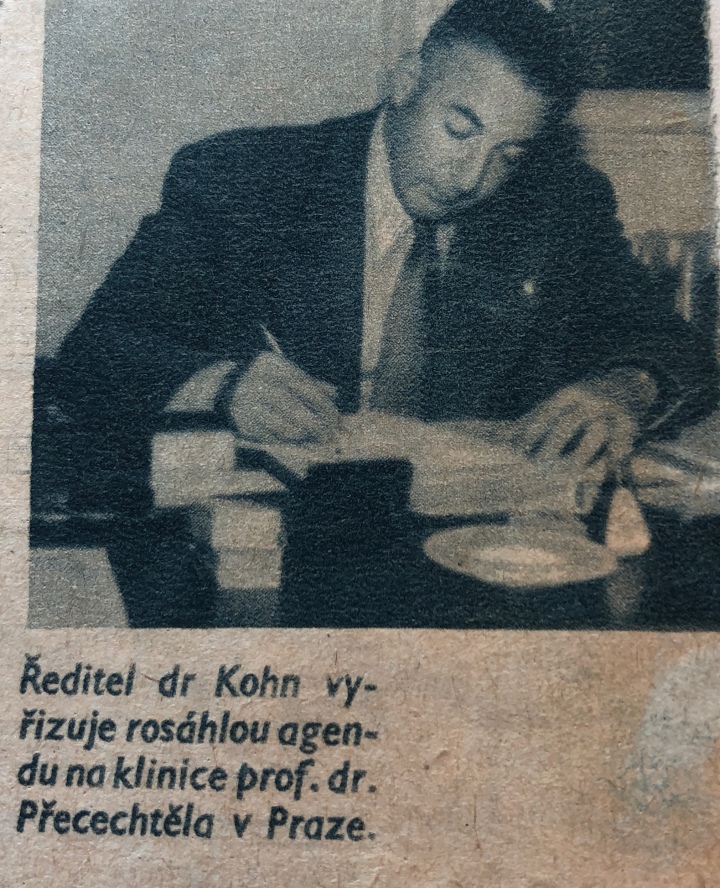 A report in a Czech newspaper (translated in the USC archives) described him as follows: “Dr Erwin Kohn, executive director, was largely responsible for the sending of this mission to Czechoslovakia. Because his parents were Slovaks, he has great interest in our country where he also lived for a period of time… he is an unusually pleasant person, who expressed nothing but the greatest confidence in conditions here on the basis of his observations during the past two months.” Clearly, in public at least, he was entirely focused on building a new country, not dwelling on past crimes. However, the description of his links with Czechoslovakia and the glaring omissions in that brief account howl at me from the page

What effect did it have on him, revisiting the world in which he had spent most of his adult life and finding it changed forever? Based in Prague, where he had studied as a young man, met Alice and hoped for a democratic future for the country, he was now expected to liaise with the men who survived. His friends, all the Jewish students with whom he had studied and socialised, had either fled the country or been deported to concentration camps, most had died there. Of the 850 doctors recorded in Czechoslovakia in 1938, only 473 remained in 1946. (Report on Czechoslovakia by Dr Frank Gollan in USC Admin records 1941-54)

And yet, after the war, there was a sense that hope could be revived, Czechoslovakia once again had its own democratic government. Under the presidency of Edward Benes, a number of parties were represented, including the communist party, who had polled the largest share of the vote and of those, many were well known to Alice. She was keen to be involved. And Erwin might still have believed a life there together was possible. In an interview with Czech radio, he was asked about his reasons for organising the mission and replied, “I wanted to bring outstanding Americans to Czechoslovakia so that they could see what had been achieved here in just one year so that they could report on it in America.” He went on to to explain that in order for the mission to succeed they needed doctors “held in high esteem by the American people… because American papers do not always write the truth about Czechoslovakia.” On being asked whether his expectations for the mission had been realised he said, they were. They had seen “great things…done” during their visit and added, “They are already making fun of the so-called ‘iron curtain’ of which people talk so much in the west.”

In that year after the war, there was a brief window of possibility that Czechoslovakia would choose to be aligned with the west. They embraced the collaboration through the medical mission and seriously considered accepting the offer of the Marshall Plan, but then, at Stalin’s insistence and with the memory of the West’s betrayal at Munich still fresh in their mind, they rejected it. The iron curtain did indeed fall; Czechoslovakia had chosen the USSR, their ‘liberators’. Alice would elect to stay, Erwin felt he could not, and that metaphorical and yet impenetrable curtain would divide them forever.

Next: The Mission to Austria – Nazis are Alive and Well and Living in Graz

5 thoughts on “Return to Czechoslovakia”