On our first evening in Albacete we went to a restaurant recommended on TripAdvisor. As we walked in, far too early for Spanish diners, we were greeted by an enormous bull’s head, stuffed and mounted on a shield. It took up the whole wall opposite the bar and was mesmerising, a most beautiful glistening black bull looking across the dining tables with a majesty that belied its ignominious position. It was awe-inspiring and sad. How could anyone want to torture and kill such a magnificent creature? Every other inch of wall in the restaurant was covered in photographs of matadors and posters and tickets for bullfights. This was not a tourist destination, the Spanish clientele made that clear. Indeed, Albacete, for all its international visitors during the civil war now has very few.

The next morning we went to CEDOBI, the library dedicated to the history of the international brigades. There we met Carmen, a slight young woman with long dark hair, with whom I had been in contact two days earlier. She already had a pile of books ready to show us. Her English was even more meagre than my Spanish and she apologised profusely for its inadequacy; we communicated in sign language and via google translate on our mobile phones. Later she explained her resolution for the year ahead was to learn English and she blamed Franco for the Spaniards’ poor English, “He kept us backward and inward looking.” 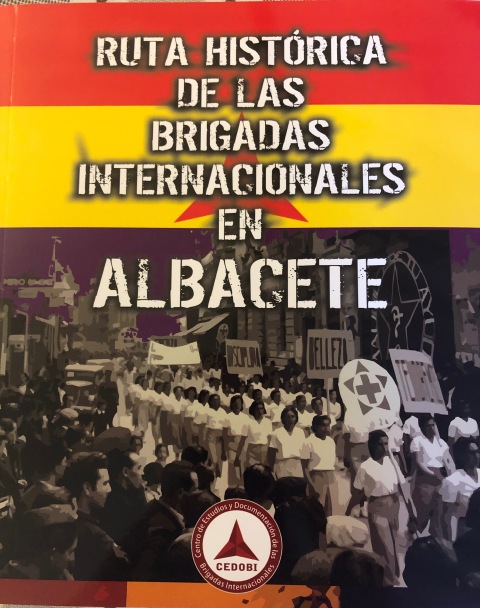 After studying the documents, we went out together into the town. She wanted to show us the bull ring. During the civil war the bull ring had been the recruitment and registration centre for the international brigades. Albacete was the distribution point and the headquarters were situated in the Gran Hotel on the main square, the very place where we were staying. Alice arrived here soon after crossing into Spain from Perpignan. It was not her first stop, that was Figueras, a few miles from the border. From here she sent Erwin the telegram explaining that she had gone to Spain and that they “belonged to two different worlds”. It was his first indication that rather than holidaying with her parents in Brussels, she had gone to join the fight against fascism. Figueras was the first port of call for the volunteers crossing into Spain but from there they needed to go to Albacete, the city of Babel, where every European language could be heard on the streets.  Once here, the raw recruits made their way to the bull ring, ready too to sacrifice their lives in an unequal contest.

All large buildings had been pressed into service, and the bull ring was no exception, but it was also symbolic. The Republicans had a different relationship with bullfighting. It did not occur during the years of the Civil War and in 1936 when the Republicans won the election and came to power, “Special pastures that had been given over to the breeding of fighting bulls… were ploughed over. In the months before the new crops would be available…” they slaughtered the bulls to distribute for food. For many of the peasants it was their first ever taste of meat. The time, land, care and money spent raising bulls for the ring accentuated the priorities of the landowners while the peasants starved and were punished for the most minor offences. In the province of Albacete
seventeen peasants were killed, and many others wounded by the Civil Guard. They had attempted to chop wood on land that had once belonged to the village..”

It was in Albacete that Alice first realised she really was now part of the resistance to Franco, she quickly made contact with others she knew from the Czech communists and began to forge relationships that would last a lifetime and which would bind them together in danger far removed from the imminent threats of bombs and typhus. She did not stay long, but was drafted to the hospital in Guadalajara, only to return a few weeks later when Otto Sling, suffering from typhus, needed to be repatriated to Czechoslovakia. Convalescents also stayed in the Gran Hotel, on the floors above the administration.  Further accommodation was found in the neighbouring Hotel Regina or other buildings around the square, now the town hall and a bank.

Albacete is a much larger town than Guadalajara, and returning here, Alice must have felt the change intensely. Guadalajara was a small hilltop community, but here on the flat plain, Albacete spread much more widely and its centre was far more grand. However, the international brigades were still concentrated in an intense closeness, grouped around the Plaza del Altozano, in the centre of which is the entrance to the bunker or bomb shelter, now a defaced and deserted tourist information office. Close by, the cathedral and its plaza were used to station the Republican tanks. Further away from the centre, a short walk from the bullring, was the fairground, used during the war as a barracks. Long lines of tents housed the various international brigades before they were dispatched to their individual battle zones.

When Carmen took us to see the fairground, it was being prepared for a fiesta. Unwittingly, we had arrived in Albacete the day before their annual fiesta in honour of the Virgin de los Llanos. The fiesta has been celebrated for three hundred years and kicks off with a huge parade and floats bearing people dressed in traditional costumes. For three days the town is filled with revellers enjoying the bands, exhibitions, dancing, food and bull fights. For on each of these three days there are bullfights and each day six bulls will have been killed. I asked Carmen whether bullfighting was still popular and she said that it was. Although she was not so keen on it, her father, brother and sister all were. She said it is as popular as ever.

Apart from the little library of CEDOBI, the civil war is hardly mentioned in Albacete. At the tourist information office, now relocated into the town hall, the assistant said regretfully there was nothing apart from CEDOBI and when I asked Carmen how Albacete had been affected by having been a Republican centre during the war, her answer was chilling. She said, “We do not talk about it. Every family in town has people who disappeared or were killed.” Franco’s troops were indeed brutal. Conquering a city was never enough, they murdered all the Republican elements they could find: trade unionists, intellectuals, anyone who had been active in supporting or sheltering activists.

The choice of the bullring as a recruiting centre was, I am sure, made for practical reasons, but I am haunted by that bull’s head in the restaurant. The bull’s defeat is always inevitable, and it has no choice but to fight.

3 thoughts on “Bullfighting in Albacete”