from Praha a Prazane by Vaclav Jiru

My month is Prague is over and already I am making plans to return.

The crowds of tourists on Charles Bridge taking selfies, the stag week-ends on beer bicycle evenings, the groups of Chinese following their guides – all of these soon became irrelevant, a surprising jolt back to the real world when I encountered them, or maybe they were the unreal world.

For me, when crossing Charles Bridge I see a quieter scene, instead of the hordes gathering at the pedestrian crossing, my eyes are on the Unitarian flag still flying above the offices from which my father’s medical teaching mission was organised. At the railway station I ignore the huge modern concourse and focus on the grand circular Art Nouveau entrance above it, the place of arrival and departure for Erwin and Alice on their many journeys to and from Zilina or on their visits to Vienna. Opposite the station is his hotel, Hotel Esplanade, where the doctors in the delegation stayed, and to which he returned exhausted after a day and a night working, to settle down finally to rest with Alice in their room.

I walk up Albertov, between the large buildings of the medical faculty and hardly notice the young people of all nationalities in jeans, walking past with their folders clasped to their chests. Instead I see a group of young Jewish men in suits, talking in German on their way to the hospital in Karlovo Namesti, the hospital where they trained and where a few years later, Helena Petrankova would spend several weeks having treatment for her knee injury. Standing there beneath the trees waiting for my tram, I imagine Alice waiting there too, to meet Helena and help her back to Zilina for her convalescence.

As I leave my Czech lessons each morning I pass through the large round ‘square’ with the army headquarters where Helena worked after the war. Now named Vitezne Namesti, then called October Revolution Square and graced by a large statue of Lenin after whom the metro station was named (now just called Dejvicka after the district). I walk through parks, go to the opera and imagine Alice and Erwin enjoying the summer evenings in Petrin, or sitting smartly dressed in the concert halls and theatres.

Later, I visit Pancrac prison, on the same tram station as Novy Sporilov, where Alice lived until her death. She must have passed the prison on her way into town. How strange to look up at the rolled barbed wire on those walls and remember the years spent inside them. How strange to look at them now and try to imagine how it must have been for her.

Revisiting places is one thing, meeting the people who knew Alice, whose parents were her friends, is quite another. I meet Pepik (Dora Klein’s son) and also Jirina, (the daughter of Otto Hromadko) first,  and we arrange to meet again for the following week with the two sons of Osvald Zavodsky. The meeting is in a typical Czech restaurant, ironically situated a few doors away from the Communist Party Headquarters. So here we are, within yards of the organisation which imprisoned and/or executed our parents (or in my case my father’s wife), and yet it is also the organisation to which they devoted their lives. The one thing everyone seems to be confident about is that their parents remained faithful to the ideology of communism to the end of their lives. 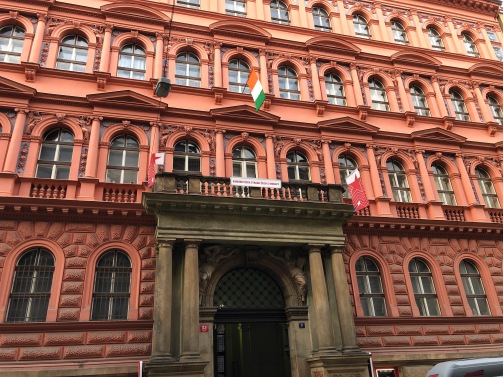 I have had some surreal experiences but none more so than the discussion on that afternoon about the whereabouts of Adolf Eichmann’s furniture. The previous day Pepik and I had gone for a walk to find the house where he grew up, or rather where he lived for the first seven years of his life. We walked up past Vitezne Namesti and he tried to find the way he had walked as a child, between the rows of allotments. Unfortunately the road seemed to be closed, so we approached from another angle. When we found it, I was surprised at what a beautiful house it was. It was not how I had imagined the years spent while his mother was in prison. He pointed out his bedroom and the balcony where a picture of Alice and her friends was taken and then he said, “Adolf Eichmann lived in this house during the war.” I have read Hannah Arendt’s book on Eichmann’s trial in Jerusalem and seen the TV film that was made of the trial. I gaped at the elegant pink building. “Adolf Eichmann lived here? And then you lived here?” His mother, Dora had spent two years in Auschwitz concentration camp and then after the war, she lived in Eichmann’s house? 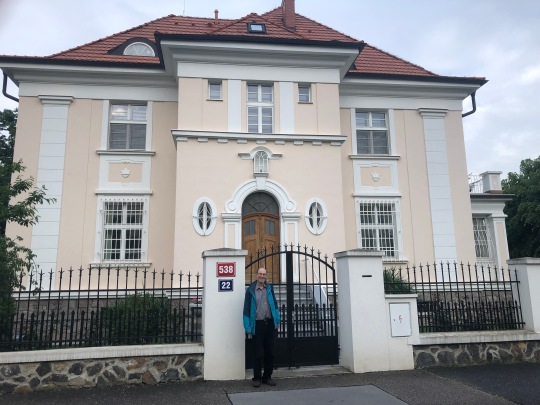 To be fair, she had not had the whole house to herself, she had shared the first floor with the widow of Egon Ervin Kisch, Gisl, whom they had known in the Spanish Civil War. Even so… Pepik went on to explain that when they returned to Poland they took some of the furniture with them. I asked if he still had it and he replied, “My daughter has the couch, it is not very comfortable.” The next day, in the restaurant I mention this exchange and Jirina is able to add to it. “We have his table,” she says, “we call it Eichmann’s table.” There follows a discussion about how Jirina’s family inherited the table from Gisl Kischova when she died and whether the furniture was bought especially for Eichmann or whether he just used the existing furniture in the house that belonged to its Jewish owners. As the discussion about whether he would have had time to find his own furniture goes on, I find myself picturing these Jewish families living for years with the furniture of the man who saw carrying out the orders that led to the deaths of millions as a bureaucratic problem, and not only the deaths of millions, but the deaths of their own families.

As our afternoon of conversation begins to draw to a close, Jiri Zavodsky turns to me and asks, “Have you visited Alice’s flat in Novy Sporilov?” I had thought of visiting it but I wasn’t sure how easy it would be and it was far out from the centre so I didn’t. There had been so much else to do and I certainly wouldn’t have had the nerve to ring on the bell if I had found it. I explain that I had not and he says, “Because Katerina lives there, Alice left it to her , it was her mother who wrote the memoir.” I am almost beyond surprise and excitement. I have been searching for descendants of Tauchmannova, whose memoir of Alice I read, as I thought that her children would definitely know something about Alice. Tauchmannova lived in the same block as Alice and was her friend in the last part of her life. And now, not only might I be able to speak to her daughter but also see Alice’s actual flat. Jiri rings her and sadly she is not well and is about to go into hospital, but she says she would like to meet. I will have to return.

The next day, I receive an email from Jiri. Katerina has given him a china figurine that belonged to Alice. She wants me to have it. We meet at the tram stop and he hands me a bag. Later, I look inside. I was prepared to treasure it, whatever it was like, but I like it for itself as well as for what it represents. I am holding in my hands something that Alice had chosen. I shall return to Prague soon, I want to meet Katerina, and I am already planning the next trip. There are so many places still to see and Prague is no longer a holiday destination, it is much more than that.

5 thoughts on “Au Revoir and not Good-Bye”